The Moment I Fell in Love with Movies 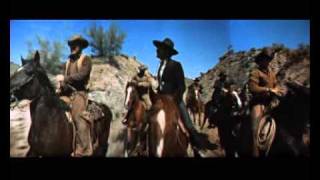 The Moment I Fell in Love with Movies

As 1963 was dawning, the Cuban Missle Crisis was winding down. George Wallace and Martin Luther King were making headlines. The country was getting ready to adopt ZIP codes.

But none of this registers for a seven-year-old. The only discussion I remember around the kitchen table was about the new movie my dad wanted to see: How the West Was Won.

We weren't poor. But back then, a carton of Cokes in the shopping bags my mom brought home on Friday nights was a big treat. Movies? There was always TV or, a couple of times a year, the drive-in, where we could sneak in our own popcorn. Spending money on a movie in the theater? Maybe once a year. But the excitement was building for this one. For one thing, just about every major movie star was in it. Names that really wouldn't loom large for me until later in life. John Wayne, Jimmy Stewart, Henry Fonda, Carol Baker, Gregory Peck, Debbie Reynolds. Lots more.

But that was only part of it. It was filmed in something called Cinerama. All I knew was that the movie was going to jump out at you. "They say when the water tower falls, it's like the water is going to spill in your lap," my mom would say. My dad had done some reading, and said we shouldn't expect that because our theater in Springfield didn't have the wide, curved screen that this movie had been made for. But I had hopes it would still look real.

I'd proved a couple of years earlier that I could be trusted in a movie theater. My parents had taken me to see 101 Dalmations, even though they were worried I'd be frightened by the evil witch (OK, Cruella Deville wasn't a witch, but scary like one). But I'd done just fine. This time they worried I'd get bored during this nearly three hour movie. But they wanted me to come along, and their excitement was so infectious that I was looking forward to it and promised I wouldn't complain.

We got there early to stake out the best seats in the center of the theater, something I still do half a century later. In my memory, the theater was an enormous movie palace. In reality, it was probably a small theater that would be dwarfed by today's megaplexes. But in my memory it's a vast space: high ceiling, a gently sloping field of plush red chairs, ending at a platform stage with a sheer curtain drawn across the screen.

That worried me. "How are we doing to see the movie?" I asked my dad. "They'll draw the curtain back just before the movie starts," he explained. "Then why have it at all?" I wondered. "It makes the beginning more special," he explained. My dad knew stuff like that.

Then there was more to be worried about. They were playing music: a singing group doing old fashioned pioneer songs I found kinda boring. I just wanted the movie to start. But when they starting singing "I'm bound for the promised land," the energy began to build, and build, until they came to a dramatic climax.

And the lights went down.

And the curtain pulled back.

And then a trumpet chorus started, strong and energetic. The voice of Spencer Tracy. "This land has a name today, and is marked on maps. But the names and the marks all had to be won. Won from nature and from primitive man. Five generations ago, a mere 125 years ago, this land was known only as The West. Known only to a handful of white men."

And time melted away.

How the West Was Won is an epic. We meet the Prescott family, a restless husband and his dutiful wife, who are taking their two teenage daughters on a journey west. It follows four generations as they live through the years of the great western expansion, the Civil War, the building of the railroads, the Gold Rush, and finally the end of the era of lawlessness. There are bawdy musical numbers and battles. A terrifying buffalo stampede that topples a water tower. (I was disappointed. I survived, dry as a leaf.) Gunfights and dancing. And romance, which I sat through patiently until something exciting would start happening again. As the singers came on for the final chorus and the buckboard took the old and new generation of Prescotts into the sunset, I felt a sense of loss. I didn't want it to end. I wanted to know what would happen to them next.

Reruns came to television periodically as I was growing up, and I watched every time I could. I recorded the soundtrack onto cassette (I loved it so much I put up with the screeching background interference). But eventually it became harder and harder to see, and my life filled up with other things.

With the dawn of the VHS tape in the 80s, I delayed reliving this special moment of my youth. I knew it could not entirely fill up the space it occupied in my memory. What if it left me feeling hollow? When I finally did see it again, I noticed the awkward splicing of the three frames. The attitude toward the Native Americans, though it tried to be respectful, still felt less than enlightened. It had won Oscars for best editing and screenplay, but clearly it was not a miscarriage that no one was nominated for acting, though Jimmy Stewart and Richard Widmark and Debbie Reynolds brought some energy to their roles.

Today, I still revisit How the West Was Won now and then. I still marvel at the grand scale of it: the war scenes, the wagon trains, the buffalo herds, the mountain landscapes. The music can still make me a little misty. What I get out of it today is reconnection with my childhood, when something as simple as going to a movie - something I take for granted now - was fresh and new and thrilling. I'll never forget that moment when the lights went down and the trumpets began to play. When the curtains opened on a world of adventure and the unknown.

That is more than enough.